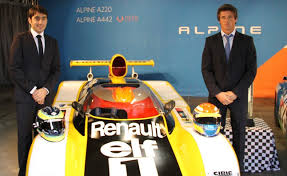 From Official Press Release from Renault:

On November 5, 2012, Renault’s senior management announced its intention to revive the Alpine brand within the framework of a partnership with Caterham. Today, under the leadership of CEO Bernard Ollivier, the recently-created Société des Automobiles Alpine Caterham is already working on a new car which is expected to reach the market in 2016.
In the meantime, the brand is gradually building up to its return to consolidate its image thanks to carefully-tailored programmes in all its traditional areas of activity.
After presentations at the 2012 Monaco F1 Grand Prix and at the Le Mans Classic week of the Alpine A110-50, which was released to mark the 50th anniversary of the celebrated ‘Berlinette’, five Alpine A110s were officially entered for the recent Rallye Monte-Carlo Historique. They were given a warm welcome by the public and afterwards joined other models of the make founded by Jean Rédélé at the Rétromobile Show in Paris, France, at the beginning of February.
Today, another important step has been taken with the announcement that an Alpine prototype is to race in the competitive 2013 European Le Mans Series endurance racing championship (ELMS), as well as at this year’s Le Mans 24 Hours (June 22-23).
The decision to compete at Le Mans fits perfectly with the brand’s heritage, since Alpine contested the famous 24-Hour race 11 times between 1963 and 1978, running a total of 55 factory cars. In addition to its successes in the ‘Energy Index’ classification in 1964, 1965 and 1968, as well as in the ‘Performance Index’ classification in 1968 and 1969, its efforts harvested seven class wins in total and, above all, outright victory in 1978 with the Alpine A442B prototype shared by Jean-Pierre Jaussaud and Didier Pironi. The two Frenchmen were joined in the top four by the A442 of Jean Ragnotti and Guy Fréquelin.