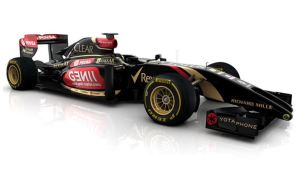 Lotus has revealed the first image of its new E22 2014 Formula One car. The car appears to have a different take on the nose scenario compared with other cars seen so far, with an unusual twin-pronged approach.

The team issued the image just as McLaren was unveiling its new F1 car online in what was clearly an attempt to gain some positive PR just hours after Lotus revealed that team principal Eric Boullier was leaving — possibly for a new job at McLaren.

The car now carries the logos of Pastor Maldonado’s sponsor PDVSA, while a new deal with Yotaphone was announced today. Coca-Cola brand Burn’s logo has been moved from the end plates to the top of the car, near the cockpit.

Lotus is the only team missing the upcoming Jerez test in Spain, and the car will thus make its track debut in Bahrain next month.
Read more: http://www.autoweek.com/article/20140124/f1/140129878#ixzz2rOA7i8So Follow us: @AutoweekUSA on Twitter | AutoweekUSA on Facebook