Collage of shots from back in 1967 Daytona

Step right up for the new Ford GT

Confirming earlier reports sourced from Reddit and adding new details in the process,the Detroit News reports that Ford GT ordering will begin with an online application that’s set to go live at some point this month. Ford will give the right to buy the first 250 GTs to customers who meet some very specific criteria.

Priority will be given to those who have a history of owning Fords, especially previous-generation GTs. This is very much out of the Ferrari playbook, though slightly more hilarious because Ford ownership history could mean anything. Could a buyer get on the Ford GT waiting list thanks to having once owned a Pinto?

Ford will also seek out customers who will drive the car, rather than keep it locked in a garage to protect future value. To that end, buyers will be required to sign a legal document preventing the sale of their GT until a certain time period has passed.

“There’s a loyal following to the car,” said Raj Nair, vice president of product development at Ford, in an interview with the Detroit News. “We want to prioritize people who are going to care about the car, keep the car and drive the car.”

Considering the new GT is expected to cost around $400,000, its eventual customers are fortunate in more ways than one.

Love this…  the real deal!

Outrageous Mustang up for Auction

Ford has had a long and successful partnership with EAA AirVenture in Oshkosh, WI, sponsoring the event and exhibited vehicles in the Ford hangar. For the last six years they have also auctioned a one-off Mustang, donating hundreds of thousands of dollars to charity. Previous year’s themes for the custom Mustangs have included the SR-71 Blackbird, Blue Angels, the Red Tails, and the USAF Thunderbirds.

This year looks to feature a very special car as well, as Ford is building a special 2015 Mustang inspired by the Lockheed Martin F-35 Lightning II. The car features a glossy and matte titanium paint scheme with blue and yellow accents, carbon fiber front splitter, rear diffuser, Recaro seats and various F-35 Lightning II design elements both inside and out.

The car will be auctioned off at the Gathering of Eagles charity event at EAA AirVenture, with the proceeds being donated to the EAA Young Eagles program. The nonprofit has provided free flights to nearly two million young people since 1992, creating a new generation of aviation enthusiasts and innovators.

Mustang Madness at the Petersen Museum

50th Year of the debut of the Mustang was held at the Petersen Museum May 4, with mockup of 2015 as well as many special Mustangs, both in the museum and in the roof parking lot.  Many thanks to the Petersen, Galpin Ford, Roush and FoMoCo for the great show! (See complete picture coverage below) 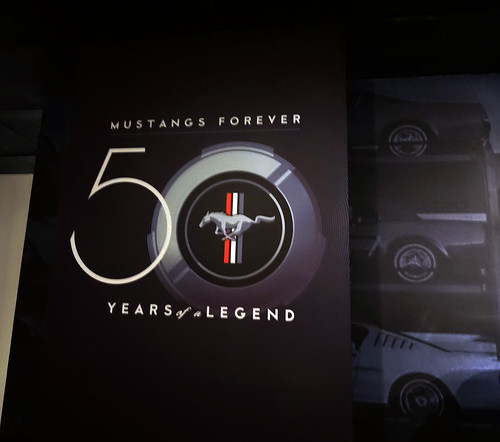 Ongoing development of the first turbocharged powerplant for the Daytona Prototype class and the recent arrival of new manufacturer-specific bodywork has the Michael Shank Racing team working overtime as it prepares for 2014.

The Ohio-based Grand-Am squad continues to spearhead the Blue Oval’s expanded involvement in the new-look United SportsCar Racing championship, assisting with the fitment and future track testing of the brand’s 3.5-liter EcoBoost turbo V6 and refining Ford’s custom DP body for use in the IMSA-sanctioned series that starts next year.

“We’re putting the turbo car back together right now,” Shank told RACER. “We have the first of the 2014 bodies here in my shop – the only set that exists. It looks awesome and I can’t wait for people to see it. The motor is also something impressive to look at, if you ask me.”

Rolex Series rival General Motors set the bar exceptionally high in 2012 when it unveiled its gorgeous Corvette-themed DP bodywork, and as the second manufacturer to build a bespoke shell for its cars, Ford will be challenged to match the visual appeal of what the Bowtie has pressed into service.

Ford Racing boss Jamie Allison confirmed to this writer that its 2014 DP body would not feature styling from a specific production model, opting to follow a general theme that has created a bit of curiosity as to what the car will look like when it breaks cover.

Its new DP powerplant is much less of a mystery, having started life as a Roush Yates-built LMP2 engine that has now been tailored to fit the tubeframe confines of a Riley chassis.

“We just did a giant endurance test on the EcoBoost motor and it performed very well,” continued Shank as he described its recent dyno run. “The entire program is going full speed forward. It sounds way better than the [turbocharged V6] Indy cars, way better than the LMP2 cars – the turbo P2 cars, and it sounded great when we did the demonstration laps around Daytona in January.”

Compared to the blaring, monotone rumble from the V8 engines that currently power the entire DP field, Shank is thankful Ford’s 2014-spec DP motor will give sports car fans a different listening experience.

“It still has that V6 tone, but it’s angrier,” he explained. “We don’t have mufflers; it’s a straight pipe out like most turbos, but it’s not restricted on the inlet side [of the turbo]; all the restricting is done through boost levels. It’s a larger displacement than the [2.2-liter] IndyCar motor and just sounds better to me. Really aggressive, which is what I’d think you’d want.”

Track testing dates for the Ford EcoBoost DP and other presentation plans are in the works, according to Shank, and could take place as the 2013 season winds down.

“We have a good idea on when we’ll be out running the car once everything is together and when it will be shown to the public,” he said. “There’s still a [DP] championship to be run, but you’ll see some news about the next steps in project that I hope will energize a lot of people who want to cheer on Ford in the new series.”

So what is this from Ford?

So what is Ford “teasing” us with?  A new Sportscar challenger? Inquiring minds want to know!

Among a range of new technology and sport features, the 2013 Ford  Mustang models feature an innovative add-on:

A small lamp, embedded under the side mirror, projects the iconic image of the mustang’s galloping horse onto the ground below.

The projection occurs whenever the vehicle is unlocked. engineers worked through six or seven designs of the system
before reaching the current, production-ready model.

Another innovative feature in the new models is a 4.2inch LCD screen, nestled between the vehicle’s odometer and tachometer,
which tracks data related to fuel economy and performance

G  forces and acceleration and braking times are recorded through
the ‘track apps’ program and can be navigated via a five-way control button on the steering wheel. How cool is this?