On a warm and sunny morning in Burbank, CA, I had the honor to meet and converse with the legendary, Parnelli Jones at book signing at Autobooks.

I’ve been fortunate to meet the man (now 83 and oldest living Indy 500 winner), a couple of times over the years and he has always been kind and willing to sign anything.  The occasion was the release of the “Trans-Am Era” by Daniel Lipetz.  Also, special thanks to Marc Vaughn, Senior West Coast Editor for Autoweek, for taking the picture for me.

All Artwork and photography taken by mymotorways.com

Will your design be the best?

How Do I Enter The Contest?

Easy!  First, read the guidelines for trophy creation below:

Next, and this is the fun part, get to designing! Let your creativity run free! The sky is the limit!

Once you have the design completed, you’ll need to submit your concept. This can be done using the below form. You must include your first name, last name, email address (so we can contact you if you win), a brief description of your trophy and the most important part – your design. Designs can be submitted in these formats: .jpg, .gif, .png, or .pdf.

From the Indianapolis Star by Curt Cavin

Fifty years ago, Jones lost the hat he wore in victory lane after winning the 1963 Indianapolis 500. It flew off his head exiting Turn 2 during the celebration lap in the pace car.  Jones hasn’t seen it since. 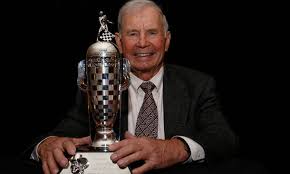 George “Skip” Surface Jr. was 12 years old when he attended that race with his family. Their car was parked along the backstretch fence when his mother, Eunice, noticed the hat on the ground.

Surface wasn’t paying attention to where the hat came from, but the adventure was there to have. Thrown over the interior fence by his father, he said he climbed a second fence before scurrying to the hat.

He tucked it and ran.

Surface considered it a souvenir similar to a foul ball grabbed at a baseball game. He didn’t know it had been on Jones’ head in victory lane because there wasn’t a video board as there is in that location today.

In fact, Surface said he didn’t know it was important to Jones at all.

“I was sure Mr. Jones could afford another hat,” he said.

The hat became Surface’s connection to auto racing, and he used it to collect autographs of several racers. Many of the names have faded over the years, but Jud Larson’s was one of them. On the front lip is the signature of Gordon Johncock, who would win the 500 in 1973 and ’82. There’s no evidence that Jones signed the hat.

Surface continues to attend the 500, and he spent a few years working on the safety patrol team. But because his hat story and Jones never came in contact, the hat stayed proudly displayed in his Johnson County home.

Things changed last week when the hat became a central part of a surprise ceremony at the North American International Auto Show in Detroit. It was there that Jones received a small replica of the Borg-Warner Trophy. His likeness on the trophy’s base has him wearing the hat, and that got Jones talking about it again.

Surface read about in Friday’s Indianapolis Star and promptly responded.

“I’m the kid who stole the hat,” he said in a telephone call to the newspaper.

Before Jones was contacted, photographs of the hat Surface possesses were compared against a series of 1963 photographs collected by a friend of Jones’, Steve Shunck. Both have the same design, featuring three rows of small holes across the top. It seems to be the same one.

The hat is called a Koko-Kooler, a summer-style hat manufactured by the Mexican American Hat Co. of St. Louis. An advertisement found online describes it as “cool and light as bamboo . . . the sun hat smart enough for Broadway.”

Reached by telephone in Philadelphia, Jones initially didn’t know how to react to the discovery.

“Did he say he was the guy who picked it up?”

Surface said if it’s important to Jones to have the hat, he wants him to have it. Besides, it’s his.

That meeting figures to come in May when Jones returns to Indianapolis for the 500. The reunion will be complete when Jones dons the hat again.

I have been a fan for over 30 years and the size and speed of yesterday’s accident at Las Vegas was terrifying.  The drivers know the risks of course, but as the cars become safer and safer, it tends to not be in the front of everyone’s thoughts, until the cold water of reality hits.  Condolences to Dan’s family and the Indycar community.  I was at the event in Fontana that took Greg Moore’s life, but back then no one knew what happened until after the race.  I think this management team did the wise thing and stopping the event as they did.

I followed the events via twitter as most of the teams in Indycar use it to communicate to fans and tone of the messages kept getting darker and darker until the announcement of Dan’s passing was made.

The racing will go on, and with the new car Dan helped test, hopefully will prevent the from occurring again.  But as Michael Andretti said, “The are professionals and they know what they are doing”.    Dark day still….