Long Beach always entertains, and this, the 40th version, was no exception.

Always a good time in Long Beach, what appeared to be “In the bag” was not and in the right place at the right time, Mike Conway, was victorious.  Besides the “brain freeze” from Ryan Hunter Reay (and a few others that piled in afterwards), the racing was great and multiple fuel/ tire strategies played into the outcome.

Sports car racing was also represented, with Ganassi and Patron team as favorites.  Do miss the Muscle Milk, Mike Shank and Dyson, so I hope they turn up again soon.  Nice to see factory effort from Porsche back in the game.

Here is a link to my Photos. 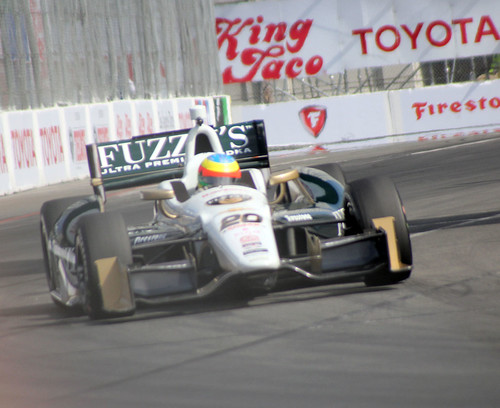 I posted comments from Gordon Kirby last week re: the possibility of Long Beach looking at F1 back in the streets.  In discussions around the e – “water cooler”, the consensus is that this will never happen with the current track configuration, the paddock space and just the general lack of run offs.  That and the fact that the current owners of the race would be hard pressed to sell one of the most profitable races on the calendar.

That’s my sense, what is yours?

More on Formula 1 and Long Beach

On his blog two weeks ago – Gordon Kirby spoke about the possibility of Bernie Ecclestone and some partners making a bid to buy the Long Beach GP – evinced denials from owners Kevin Kalkhoven and Jerry Forsythe. Long Beach boss Jim Michaelian, who was particularly aggrieved, grumbled to me about dragging up old news. But from all I’m told there’s no doubt that Ecclestone, Zak Brown and Chris Pook are going to make a bid to buy the race in 2015 with plans to install F1 back in Southern California in 2016.

It’s been reported that Long Beach mayor Bob Foster will fly to the Canadian GP in June to meet with Ecclestone to begin discussions about Bernie’s sales pitch. If that happens, it will be clear the game is on and you can be sure that Ecclestone’s pitch will be lucrative for Long Beach while the global exposure figures the city would receive from a contemporary F1 race would dwarf today’s tepid IndyCar numbers.

This year’s race drew 375,000 viewers on NBC Sports Network in the United States, down 20% from 468,000 last year. Through this year’s first three IndyCar races NBCSN is averaging 343,000 viewers, 10 times smaller than a typical NASCAR race. Twenty years ago, when Nigel Mansell was racing for Newman/Haas in CART’s IndyCar World Series, the domestic TV audience for CART equalled NASCAR, but those days are long gone.

Similarily, the media centres at Long Beach and most other IndyCar races these days are quiet, almost deserted, unlike the raucous crowds from the Mansell days that continued through Alex Zanardi’s three years in Indycars with Ganassi’s team a few years later. But today, IndyCar is almost entirely absent from the mainstream media across the United States. Outside the city of Indianapolis, the series has little or no identity and sadly has become one of America’s smallest, most irrelevant sports. A big part of Bernie’s sales pitch to Long Beach will be the transformation in the global media exposure F1 would bring the race.

Of course, the return of F1 to Southern California would bring a similar transformation to the race’s current comfortable ambience and accessibility. Like all modern F1 races it would become much more restricted, segregated and expensive for all.

It will also be expensive for Ecclestone and his partners. They will have to spend a lot of money to upgrade the track and pitlane and it might be a challenge to find the room and suitable location for today’s spacious F1-spec media centre.

Without doubt, the loss of Long Beach would be a blow for IndyCar. The race is by far IndyCar’s biggest and best street race and the series’ second most important race behind only the Indy 500, so Kalkhoven and Forsythe will be reluctant to cede control of the race.